“A career serving the Nation and the Community” 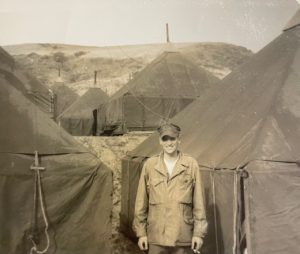 After high school in Gilboa, New York, Frank enlisted in the Marine Corps in 1954. As a teenager, he was given a rifle as a gift and he became an excellent marksman. During boot Camp at Paris Island, near Beaufort, South Carolina, he was awarded a Sharp Shooters medal for proficiency. Paris Island provides recruit training for those enlisted in the Marine Corps and includes a thirteen-week process during which the recruit must adapt to a Marine Corps lifestyle.

Frank completed his training at Camp Lejeune and then was assigned to Cold Weather training at the Marine Corps Installation in Pickel Meadows, California. It is located at 6,800 ft. above sea level in the Toiyabe National Forest. It was established in 1951 as a Cold Weather Battalion with a mission of providing Cold Weather Training for replacement personnel bound for Korea.

He joined “C” Company, 1st Amphibian Tractor Battalion, 3rd Marine Division at Camp McGill, Japan. His assignment was to be an Amtrac driver. An Amtrac is an amphibious warfare vehicle landing craft. Each craft carried about 25 Marines with combat equipment. 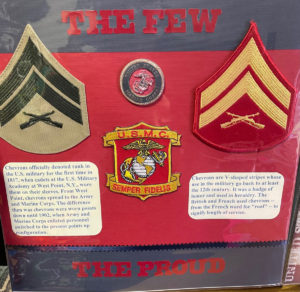 The 1st Combat Assault Battalion conducts and supports amphibious operations and other operations as required by landing and transporting to inland objectives the surface assault elements and their equipment, conducting close combat engineer support; and by conducting light armored reconnaissance and limited offensive and defensive operations. When task-organized with infantry, tanks and other forces, the battalion conducts combined arms operations as a separate maneuver element in support of the Marine Division.

The Battalion was activated 16 February 1942 at New River, North Carolina as the 1st Amphibian Tractor Battalion, 1st Marine Division. It relocated during May 1942 to Wellington, New Zealand, and participated in the following World War II campaigns: Guadalcanal, Finschhafen, New Brittain, Pelelieu, and Okinawa. The unit was deactivated 17 November 1945 at San Diego, California.

The Battalion was reactivated 1 May 1946 at Camp Pendleton, California as the 1st Amphibian Tractor Battalion, 1st Marine Division. It participated in the Korean War from the Pusan Perimeter in operations from Inchon to Seoul, Chosin reservoir, East to Central Front, and the Western Front. It subsequently participated in the defense of the Korean Demilitarized Zone from August 1953 to March 1955.

The unit relocated during March 1955 to Camp McGill, Japan. The unit was reassigned 16 March 1965 to the 3rd Marine Division and deployed during July 1965 to Da Nang, Republic of Vietnam. It participated in the war in Vietnam, July 1965 to July 1969, operating from Da Nang and Cua Viet. The unit was redesignated 5 October 1994 as the Combat Assault Battalion. 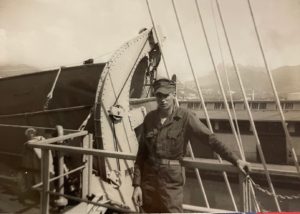 After his service in Japan, Frank was assigned to the Marine Corps Base at Quantico, Prince William County, Virginia. Quantico is the home of major training institutions for both the Marine Corps and federal law enforcement agencies, including the Defense Intelligence Agency, Drug Enforcement Administration (DEA), the FBI Academy, FBI Hostage Rescue Team and others.

Frank spent his last three months in the Marine Corps at Camp Lejeune and was discharged in 1957.

Frank was introduced to MaryAnn Schardl of New Britain, Connecticut by his sister-in-law. Frank and MaryAnn were married on June 27, 1959. They have three daughters, Margaret, Lisa, and Kathleen, six grandchildren and two great-grandchildren.

On October 20, 1962, Frank joined the New Britain, Connecticut police department and retired after 25 years of service. He then served 10 years as a Judicial Marshall for the State of Connecticut in New Britain, before full retirement.

After retirement, Frank was diagnosed with end-stage renal failure. The Veterans Administration determined that his kidney disease was service-related due to his two tours at Camp Lejeune and his exposure to the water contamination on the facility.

Prior to his death on March 12, 2018, Frank and his family were awarded compensation from the Veterans Administration for his service-related health condition.

To all Veterans and their families who lived at Camp Lejeune, between August 1, 1953 and December 21, 1987 please see the HEALTH section of this Website for details on the Water Contamination Legislation.