“A career serving the Nation in the Air Force”

Robin Mueller was born, Robin Pascoe, on August 5, 1949 in Vallejo, California. She is the eldest child of Albert and Majorie Pascoe. She has four siblings, Laurel, Kenneth, Marilynn, and Teresa.

Robin graduated from Tooele High School in Tooele, Utah. The town of Tooele is a mining town of copper and zinc and during World War II the government established the Tooele Ordnance Depot.

Albert Pascoe was a gunsmith for the government, and he worked in Benecia, California. He was an Army Veteran and a decorated hero of World War II. He was awarded a Bronze Star and three Purple Hearts for his heroism in the battle of Anzio. The Battle of Anzio was a battle of the Italian Campaign of World War II that took place from January 22, 1944 to June 5, 1944.

As a young girl, growing up in Vallejo, Robin heard the stories about the heroism of her father and was inspired to join the military. She joined the Air Force in February 1974 and was sent to Lackland Air Force Base in Texas for basic training. Her husband Jerry had also joined the Air Force and was assigned to the Air Cargo wing.

During the Gulf War, Robin was stationed at McGuire Air Force Base in New Jersey as an Air Force cargo loader in the Air Mobility Wing. Her unit supported Operation Desert Shield and Operation Desert Storm from August 1990 to February 1991. They loaded C-5s and C141s with cargo of all types from lettuce to munitions. They also transported the Presidential vehicles. The C-5 was built to carry more cargo than any other plane.

The C-5m can lift more than a quarter million pounds. The C-141 Starlifter is a long-range strategic airlifter, designed for transporting large quantities of either cargo or passengers.

Robin retired from the Air Force in 1999 after 26-years in service. She worked for TSA in Sacramento for eight and a half years as a Supervisor/Manager of airport personnel before she retired.

Robin joined the American Legion and now serves as Commander of Post 113 in Napa, California.

Robin and her husband Gerald have two children and one grandchild. Gerald passed away on March 9, 2015.

A cousin of Robin’s published the following story of the exploits of her father, Albert Pascoe, during World War II. 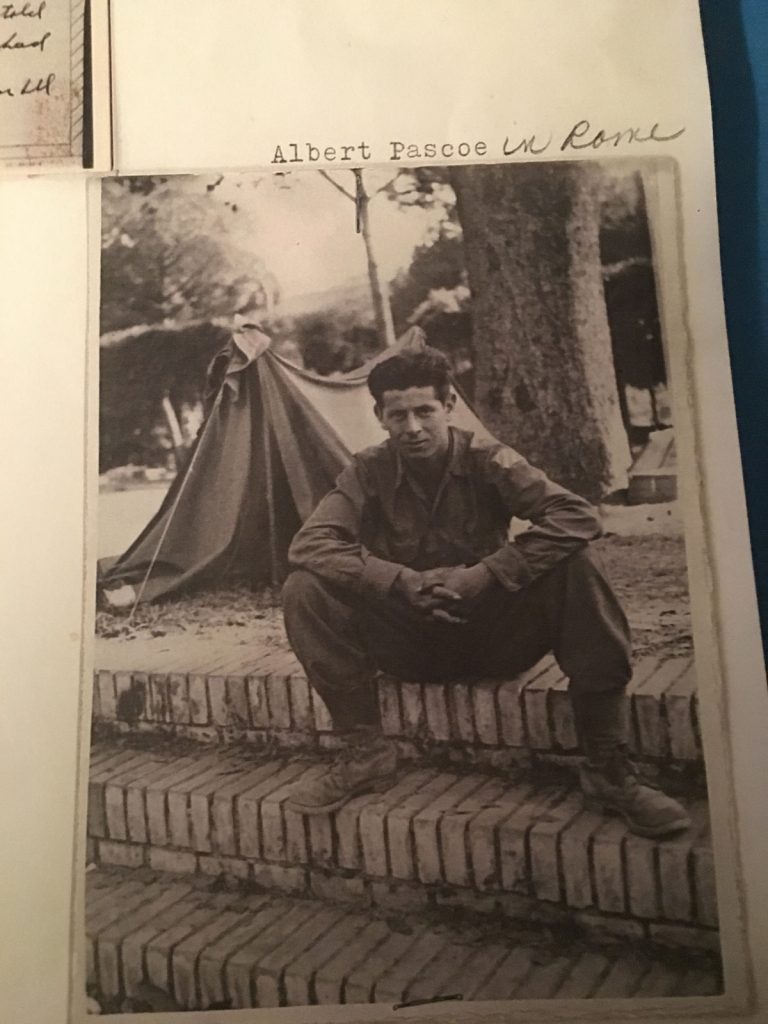 In 1940 Albert “Bert” Pascoe had just finished his high school education. Not knowing what occupation he wanted to pursue, he decided to enlist in the Army. After receiving basic training, he was among the first to be shipped overseas when war was declared with Germany. He was assigned to the Fifth Army, Third Infantry Division.

He landed in North Africa at the city of Tunisia. After several battles, he was wounded and received the purple heart for his actions. While he was in the hospital recuperating from his wounds, his unit was sent out on a mission and never came back; they were killed in the massacre of Kasserine Pass.

(The battle was the first engagement between U.S. and Axis forces in Africa. Inexperienced and poorly led American troops suffered many casualties and were pushed back over 50 miles from their original position at Faid Pass. The Americans lost 3,300 killed and wounded and 3,000 POWs.)

After recovering from his wounds, Albert, was sent to Sicily where his unit fought in the battle of Salerno. After Salerno, his unit advanced to the port of Naples where they were ordered to seize the beachhead in the vicinity of Anzio.

During the landing operation at Anzio, the launch that Albert was in was hit by a shell. Only three soldiers survived the explosion and Albert escaped without injury. The landing force was composed primarily of American troops of General Mark Clark’s Allied Fifth Army and they were stalled at the beachhead suffering high casualties.

Albert was ordered to find the break in the communication wire, and he crawled out under mortar fire across a hill slope, feeling his way along the wire. When he had gone 75 yards on his hands and knees German machine guns began firing on him. He splashed into a hole of muddy water and kept low until the guns quieted down. As he came out of the muddy hole, he managed to crawl 25 more yards before the Germans’ pinned him down again with machine gun fire. He finally found the break in the communications wire and laid on his back as he repaired the wire.

As he was about to return to his units’ lines, an intense enemy artillery barrage pinned him down in the cold mud for half an hour. The result of the artillery barrage was damage to the communication wire, and he had to repair it in two places.

Returning to his platoon, he was caught under an enemy dive-bombing attack on the hill. He recounted that “I just lay in a shell hole and watched a plane come right down on me. I could see the bombs leave their rack as they fell towards me.” The bombs landed about 75 yards away and Albert was shaken up and covered with loose dirt. The bombing broke the communication wire again and he had to crawl out and repair the breaks. The machine guns opened-up on him again and a couple of German snipers fired at him. He finally crawled back to his platoon after spending over two hours repairing the communication wire many times. He said that what he had done was in his natural line of duty. He was a frontline infantryman.

Albert and his unit were given the honor of being the first to enter Rome. They were given an audience with the Pope who thanked them on behalf of the Italian people as their liberators. He received two rosary beads that were blessed by the Pope and he had the honor of kissing the ‘Fisherman’s Ring’.

He was recommended for a Silver Star but was awarded a Bronze Star to go with his three Purple Hearts. He had been overseas for twenty-two months.

Prior to leaving for the United States, he traveled through France and Germany. He and his friends visited a concentration camp and witnessed the horrors of the holocaust.