John Mullins was always planning on becoming a police officer when he grew up and later in life was finally able to achieve his dream with the U.S. Department of Veterans Affairs Police.

John graduated from high school in Wichita Falls, Texas and went on to attend Valley College in Van Nuys, California. He joined the Air Force in January 1971 and went through basic training at Lackland Air Force Base near San Antonio, Texas. After basic training he was transferred to Chanute Field, Illinois, where he was trained as a parachute rigger AFC (85150). In May 1971 he was assigned to Bergstrom Air Force Base in Austin, Texas. While at Bergstrom, he was involved in skydiving and he would travel with a group of fellow Airmen to Fort Hood, Texas to skydive in competition with Army units. On October 23, 1971 during his last jump of the day he was severely injured when his left foot was caught on uneven turf as he was landing on the ground turning his foot around facing the wrong direction as he came to a stop.

While stationed at UBON Air Force Base in Thailand he reinjured his ankle during his assignment with the Security Police. He was then transferred to Travis Air Force Base in California for the next seven months to recuperate from his injuries.

His ankle never fully recovered and his plans for a career in the Air Force were not realized. He left the Air Force on November 2, 1973.

In 1975 he graduated from the Phoenix Police Academy and worked as a reserve officer with the Tempe, Arizona Police Department. 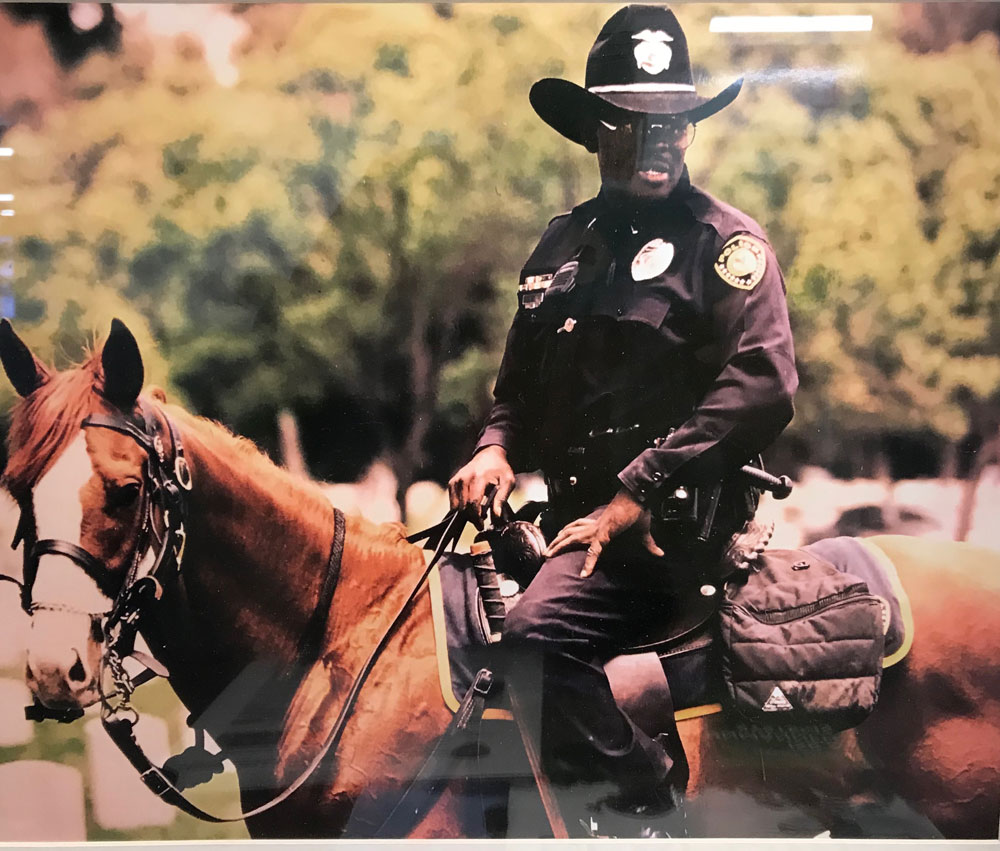 While living in Phoenix, he met Hugh Benson, an executive producer for Columbia Pictures, who hired him as an extra for the TV movie “Fire in the Sky”. Benson became a mentor for John in the Movie and TV industry and he soon was working in other movies as an actor. His first acting job was as one of three Private Investigators in the TV movie “The Child Stealers” with Beau Bridges and Clair Bloom. His next role was a small part on M.A.S.H. He worked as a guest-star on a TV episode of “A Man Called Sloan” with Robert Conrad. He was considered for one of the lead acting roles in Magnum PI but lost out to the actor, Roger Mosley, in the role as a helicopter pilot.

In August 1983 he joined the cast of “The Young and Restless”, a daytime drama that is currently in its 47 th season. It has been the number one daytime drama for 30 years. John’s character in the drama was named Jazz Jackson and he performed the role from 1983 through 1986.

In 1993 while working for McDonald Douglas in Long Beach, California as a security officer, he met a retired police officer who encouraged him to pursue a police officer position at the Federal VA in Los Angeles. McDonald Douglas was an aerospace manufacturer based in Southern California. McDonald Douglas later merged with its rival Boeing in 1997. Boeing merged Douglas Aircraft into the Boeing Commercial Airplanes Division and the Douglas Aircraft name was retired after 75 years. John left McDonald Douglas in 1993 to join the U.S. Department of Veterans Affairs Police in West Los Angeles, California. He worked as a Department Law Enforcement Liaison to the U.S. Attorney’s Office of the U.S. District Court, Los Angeles 1995 – 1997. His next assignment was as a Contractor Liaison for the installation of security systems 1997 – 1999. From 1999 until 2003, Lt. Mullins was Coordinator of the Departments Special Response Team (SRT). The unit was assigned special detail’s including demonstrations, for the protection of VA property and dignitary protection. The Team trained with the FBI as well as other local agency SWAT teams. Lt. Mullins also performed Mounted Police duties for special patrol needs and other VA functions with his horse “Geronimo”. In the event of community emergencies, including bomb threats, earthquakes, fires or demonstrations Lt. Mullins was responsible for implementing law enforcement and security response plans. Response plans involved coordinating with medical center management and other Federal State and local agencies.

John, after 12 and one-half years of service was medically retired in January of 2004, from the United States Department of Veterans Affairs Police in West Los Angeles, California. In 2014 he was officially retired with a total of 20 years of service to his country. During his career he received many awards and commendations for excellence in service